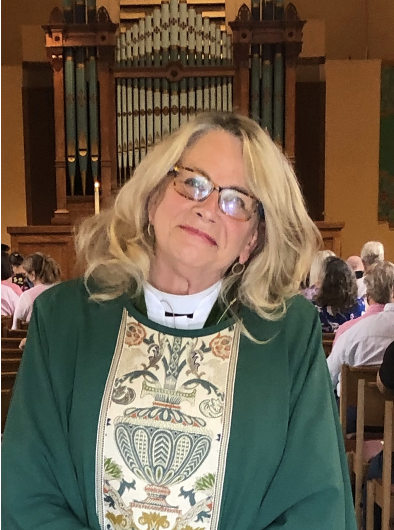 In choosing Jamie Barnett to be our new, part-time Priest-in-Charge, and with what he called Epiphany’s “unique gifts” in mind, Bishop Taylor has selected a pastoral leader with a rich, multi-dimensional background. Jamie’s path to the priesthood, which began later in her life, was one borne of deep spirituality spurred by personal loss. The seed was first planted while attending various Episcopal churches around the country as she raised her family, and it grew through her years of involvement in many capacities as a dedicated lay minister at All Saints Church, Pasadena.

Jamie’s theological studies took place at Bloy House in Los Angeles as well as the program provided through Episcopal Divinity School in Cambridge, Massachusetts. She enthusiastically embraced this challenging, four-year journey while holding down a full-time job as well as a hospital chaplaincy, which was part of her training. “There are times when I think, “How did I do all that?” she laughs. “Well, I didn’t do it – it was with God’s help. God was getting out ahead of me and making the way.”

Following her ordination, Jamie returned briefly to All Saints as a deacon but looked forward to having her own church. She soon received a call from the rector at St. Michael’s shortly thereafter, asking her to become his assistant rector. There she shared regular preaching and presiding duties, led Advent and Lenten study groups, assisted with Sunday Bible study classes, and filled in when the rector was away. She organized a young adult group and participated in all pastoral duties. She worked closely with the rector to navigate the church’s online presence throughout the pandemic. It is from St. Michael’s that she has now been called to serve at The Church of the Epiphany.

Jamie began a long and successful television career with the CBS Studio Center’s grip department in 1993. In 2000 she became the first, and is still the only female to have led that department at any major Hollywood studio. The work of a “grip” entails hands-on involvement and coordination of lighting and staging for TV and motion pictures. Her responsibilities have also included controlling department production costs, overseeing daily operations, and managing the creative whims of many, many producers!

Tragically, in 2005 Jamie’s 24-year-old daughter, Ashley, died while on a three-day cruise. Since that time, Jamie has been very active in the formation of a grassroots victims’ advocacy group called International Cruise Victims, which lobbies Congress for legislation to better protect the rights and safety of cruise ship passengers worldwide. The organization worked tirelessly to see through the successful passage of a bill known as the Cruise Vessel Security and Safety Act of 2010, which President Obama signed into law.

Following such traumatic personal loss, Jamie was drawn to anything that would help her cope with her grief, and in 2007 she trained to become a grief group facilitator. She also completed By Your Side, the Episcopal Church’s training for end-of-life companioning, as well as Education for Ministry. In addition to that, she became a spiritual director in 2012 through a deep, contemplative, two-year program at Stillpoint in Pasadena. Gradually Jamie began to find meaning through her loss. It was that discovery, together with the encouragement from others who said, “Jamie, God is going to use you!” that cemented her decision to pursue the priesthood. “It was a divine and holy time of listening to what the Holy Spirit was directing me towards,” she explained.

Jamie cherishes spending free time with her grown children and grandchildren. She also enjoys the beach and loves to travel. She does beadwork, and is an avid reader. Currently living in a cute Pasadena bungalow, she has a guest room waiting at her son’s Simi Valley home so she’ll have regular, easy access to our Epiphany family.

In his letter to our congregation last week, Bishop Taylor communicated that Jamie’s will be a “transitional ministry” as we discern where the Holy Spirit is leading us next. As conveyed during our service on Sunday, her first priority will be to practice “holy listening,” to get to know us and listen to our stories. She also intends to have a strong pastoral presence, including among those who are homebound or hospitalized; provide thought-provoking sermons; lead with vision, compassion and strength; and help broaden our community relationships. She wants to engage us in conversation about how we can grow, and where we can be creative and collaborative. “All these things,” she said, “we will do with excellence.”

Jamie, welcome to The Church of the Epiphany!

In light of the safe-at-home measures our state and our diocese are requiring, we have transitioned to virtual worship together. Services and meetings are being streamed through Facebook Live and our website.