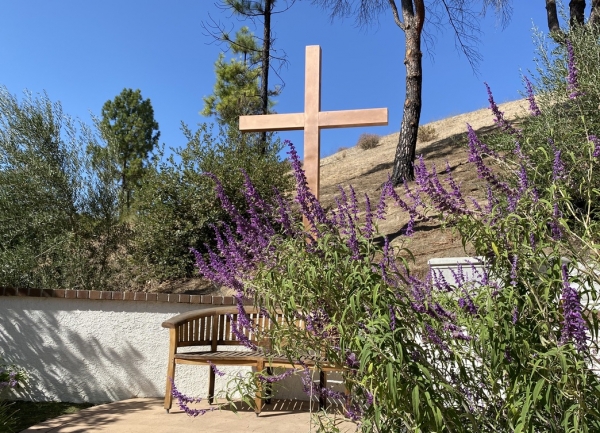 In 1979, hoping to establish an Episcopal mission to serve their communities, and with support from the Diocese and local clergy, a group of Westlake Village and Agoura Episcopalians gathered. A steering committee was established, and they began their work.

On January 6, 1980, the Feast of the Epiphany, 134 persons arrived at Westminster Presbyterian Church in Westlake Village to celebrate the beginning of this new venture. When the supply of communion wafers ran out, lemon cake, meant for the coffee hour, was used as a substitute. To this day, lemon cake holds a special place in the hearts of Epiphany’s founders.

On July 6, 1980, temporary quarters were found at White Oak Elementary School. A portable altar, credence table, lectern, altar frontal and beautiful seasonal hangings decorated this temporary space. One hundred prayer books and hymnals were purchased through family member donations. A small organ was donated and stored in the school closet.

In March of 1987, with the help of the Diocese and Epiphany member pledges, the hilly corner at Kanan Road and the future Churchwood Drive was purchased.

Through parish-wide surveys, it became clear that a “traditional Episcopal church” was desired and “it must have a steeple. ”Epiphany was the beneficiary of gifts from Church of the Ascension as this church was being deconsecrated. Our baptismal font, altar silver, sterling silver procession cross and torches, linens, vestments and twenty-four stained glass windows are all part of their gift to us. Thought was even given to moving the actual wooden structure that was Ascension to our site, but this idea was eventually abandoned due to structural complications and hidden costs.

After trials and tribulations and a lot of prayer, our permanent home was finally built, and the Dedication and Consecration was held January 7, 1996. As a founding member said, “It took faith to stick it out.”

We are so glad they did!

Over the past 40 plus years we have seen Epiphany grow in numbers and in vitality. We invite you to join us as we grow and work to bring God’s hope and love into the world!