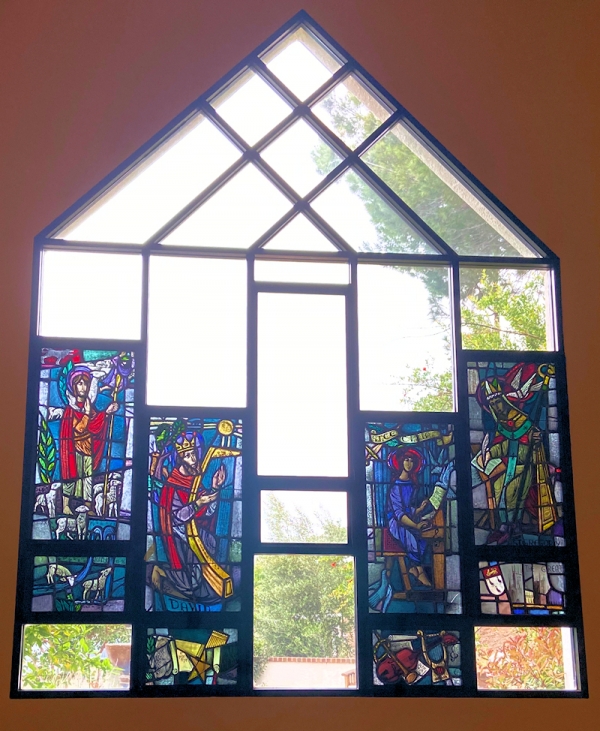 Our 24 stained glass windows were a blessed gift from Church of The Ascension in Tujunga, CA when it was deconsecrated due to unsustainability. Although devastated about having to close a church, then Bishop Frederick Borsch offered the windows and several other items (a cross, chalice, linens, and the baptismal font) to the fledging mission The Church of the Epiphany. The windows were put in Judson Studios for safekeeping, and in fact Walter Judson later became our designer, along with his assistant Cindy Voorhies, now a priest in our diocese. The windows were installed with the clear surrounding glass at that time.

The Birth of Jesus Foretold

In the sixth month the angel Gabriel was sent by God to a town in Galilee called Nazareth, to a virgin engaged to a man whose name was Joseph, of the house of David. The virgin’s name was Mary. And he came to her and said, “Greetings, favored one! The Lord is with you.” But she was much perplexed by his words and pondered what sort of greeting this might be. The angel said to her, “Do not be afraid, Mary, for you have found favor with God. And now, you will conceive in your womb and bear a son, and you will name him Jesus. He will be great, and will be called the Son of the Most High, and the Lord God will give to him the throne of his ancestor David. He will reign over the house of Jacob forever, and of his kingdom there will be no end.” Mary said to the angel, “How can this be, since I am a virgin?” The angel said to her, “The Holy Spirit will come upon you, and the power of the Most High will overshadow you; therefore the child to be born will be holy; he will be called Son of God. And now, your relative Elizabeth in her old age has also conceived a son; and this is the sixth month for her who was said to be barren. For nothing will be impossible with God.” Then Mary said “Here am I, the servant of the Lord; let it be with me according to your word.” Then the angel departed from her.

The Birth of Jesus

In those days a decree went out from Emperor Augustus that all the world should be registered. This was the first registration and was taken while Quirinius was governor of Syria. All went to their own towns to be registered. Joseph also went from the town of Nazareth in Galilee to Judea, to the city of David called Bethlehem, because he was descended from the house and family of David. He went to be registered with Mary, to whom he was engaged and who was expecting a child. While they were there, the time came for her to deliver her child. And she gave birth to her firstborn son and wrapped him in bands of cloth, and laid him in a manger, because there was no place for them in the inn.

The Escape to Egypt

Now after they had left, an angel of the Lord appeared to Joseph in a dream and said, “Get up, take the child and his mother, and flee to Egypt, and remain there until I tell you; for Herod is about to search for the child, to destroy him.” Then Joseph got up, took the child and his mother by night, and went to Egypt, and remained there until the death of Herod. This was to fulfill what had been spoken by the Lord through the prophet, “Out of Egypt I have called my son.”

The Boy Jesus in the Temple

Now every year his parents went to Jerusalem for the festival of the Passover. And when he was twelve years old, they went up as usual for the festival. When the festival was ended and they started to return, the boy Jesus stayed behind in Jerusalem, but his parents were unaware of this. Assuming that he was in the group of travelers, they went a day’s journey. Then they started to look for him among their relatives and friends. When they did not find him, they returned to Jerusalem to search for him. After three days they found him in the temple, sitting among the teachers, listening to them and asking them questions. And all who heard him were amazed at his understanding and his answers. When his parents saw him they were astonished, and his mother said to him, “Child, why have you treated us like this? Your father and I have been anxiously looking for you.” He said to them, “Why were you searching for me? Did you not know that I must be in my Father’s house?” But they did not understand what he said to them. Then he went down with them and came to Nazareth and was obedient to them, and his mother treasured all these things in her heart.

And Jesus increased in wisdom and in years, and in divine and human favor.

As they were leaving Jericho, a large crowd followed him. There were two blind men sitting by the roadside. When they heard that Jesus was passing by, they shouted, “Lord, have mercy on us, Son of David!” The crowd sternly ordered them to be quiet, but they shouted even more loudly, “Have mercy on us, Lord, Son of David!” Jesus stood still and called them, saying, “What do you want me to do for you?” They said to him, “Lord, let our eyes be opened.” Moved with compassion, Jesus touched their eyes. Immediately they regained their sight and followed him.

The next day the great crowd that had come to the festival heard that Jesus was coming to Jerusalem. So they took branches of palm trees and went out to meet him, shouting,

“Hosanna! Blessed is the one who comes in the name of the Lord—the King of Israel!”

Jesus found a young donkey and sat on it, as it is written:

“Do not be afraid, daughter of Zion. Look, your king is coming, sitting on a donkey’s colt!”

The Crucifixion of Jesus

So they took Jesus; and carrying the cross by himself he went out to what is called the Place of the Skull, which in Hebrew[a] is called Golgotha. There they crucified him and with him two others, one on either side, with Jesus between them. Pilate also had an inscription written and put on the cross. It read, “Jesus of Nazareth, the King of the Jews.” Many of the Jews read this inscription because the place where Jesus was crucified was near the city, and it was written in Hebrew, in Latin, and in Greek. Then the chief priests of the Jews said to Pilate, “Do not write, ‘The King of the Jews,’ but, ‘This man said, I am King of the Jews.’ Pilate answered, “What I have written I have written.” When the soldiers had crucified Jesus, they took his clothes and divided them into four parts, one for each soldier. They also took his tunic; now the tunic was seamless, woven in one piece from the top. So they said to one another, “Let us not tear it but cast lots for it to see who will get it.” This was to fulfill what the scripture says,

“They divided my clothes among themselves, and for my clothing they cast lots.”

And that is what the soldiers did.

After this, when Jesus knew that all was now finished, he said (in order to fulfill the scripture), “I am thirsty.” A jar full of sour wine was standing there. So they put a sponge full of the wine on a branch of hyssop and held it to his mouth. When Jesus had received the wine, he said, “It is finished.” Then he bowed his head and gave up his spirit.

The Resurrection of Jesus

After the Sabbath, as the first day of the week was dawning, Mary Magdalene and the other Mary went to see the tomb. And suddenly there was a great earthquake, for an angel of the Lord, descending from heaven, came and rolled back the stone and sat on it. His appearance was like lightning and his clothing white as snow. For fear of him the guards shook and became like dead men. But the angel said to the women, “Do not be afraid, for I know that you are looking for Jesus who was crucified. He is not here, for he has been raised, as he said. Come, see the place where he lay. Then go quickly and tell his disciples, ‘He has been raised from the dead, and indeed he is going ahead of you to Galilee; there you will see him.’ This is my message for you.” So they left the tomb quickly with fear and great joy and ran to tell his disciples.

David Plays the Lyre for Saul

Now the spirit of the Lord departed from Saul, and an evil spirit from the Lord tormented him. And Saul’s servants said to him, “See now, an evil spirit from God is tormenting you. Let our lord now command the servants who attend you to look for someone who is skillful in playing the lyre, and when the evil spirit from God is upon you, he will play it, and you will feel better.” So Saul said to his servants, “Provide for me someone who can play well, and bring him to me.” One of the young men answered, “I have seen a son of Jesse the Bethlehemite who is skillful in playing, a man of valor, a warrior, prudent in speech, and a man of good presence, and the Lord is with him.” So Saul sent messengers to Jesse and said, “Send me your son David, who is with the sheep.” Jesse took a donkey loaded with bread, a skin of wine, and a kid and sent them by his son David to Saul. And David came to Saul and entered his service. Saul loved him greatly, and he became his armor-bearer. Saul sent to Jesse, saying, “Let David remain in my service, for he has found favor in my sight.” And whenever the evil spirit from God came upon Saul, David took the lyre and played it with his hand, and Saul would be relieved and feel better, and the evil spirit would depart from him.

Are you looking for a spiritual connection? A place to worship? A place to earn about and grow your faith? A place to serve others in the community? A place to get involved? A place for friendship? You've come to the right place!